Waylon Jennings’ ‘Can’t You See’ crackled through the speakers. The hum of the road joined in with the country melody as if it was the missing instrument in the ensemble. I smiled as I listened and watched the outside temperature climb on the dashboard thermometer. It was only 8am and it was already a blistering 105f outside. Behind us, our surfboards hung out of the bed of the truck. A long way in front of us, white painted lines were converging on the horizon at a point that seemed to push endlessly forward, pulling us with it. It'd been too long since my last adventure and damn, it felt good to be on the road again.

We’d crossed the boarder a while back. Before passing that invisible line, my thoughts had been tangled up with all the dramas and worries that had become the recent background noise to my life.. Yet, after crossing that invisible line, my mind was in beautiful silence - hushed by foreign landscapes and lulled by a freedom that only the sense of adventure can provide.

Inspired by that new found freedom - or maybe just the country music -  we’d wedged a cheap styrofoam esky between the front seats of the truck. It squeaked and rattled over every bump but it was a small annoyance to deal with for the convenience of having icy cans of Mexico’s finest (or at least cheapest) at our fingertips. It’s not something you’d really do at home but hey, we were in remote Mexico, it was as hot as hell, and we had a really long way to go.

Hours later, down an unsurfaced road in the middle of nowhere, an orange light popped up on the dashboard. It took us a while to notice it and then even longer to find the page in the  cars manual that told us we probably should’ve already pulled over. As it turned out, one of the rocks we’d been slowly bouncing over had won the battle against the tyre and stolen all of its air. Despite it now being 115f outside and me being more concerned with documenting the tyre-changing process than helping to fix it, we were on the ‘road’ again fairly quickly.

We hadn’t gone more than ten minutes before we stopped again so I could whip out the camera. A lone cactus stood by the roadside with an old tire hanging from one of its limbs. It takes a patient friend to go on a surf trip with a photographer who wants to stop constantly, but in good spirits Mike commented as I climbed out - “this will be a good one to sum up our trip!”. My laughter stopped as soon as I walked around the truck and heard that telltale hiss of rubber being defeated again. Crap.

When you’re by yourself, the desert’s an eerily quiet place. The blanket of searing heat silences the insects and the breeze barely has anything to whistle through as it moves by. Luckily, a couple of Americans driving home had found us and offered to drive Mike and our two flat tires somewhere to get fixed while I stayed behind to look after our surfboards and gear. Long, sweaty hours dragged by as I took relative shelter from the heat in the shade of the black truck, clinging to a bottle of water. I’d almost given up on wondering if they’d be back soon and had started wondering if they were even going to be back before nightfall. Help was a long way off.  As I entertained the thought of spending the night alone in the desert, a wave of excitement came over me and I couldn’t help but smile at my situation - “this is what it’s all about” I thought to myself,  “this is why I do what I do”.

There’s a particular moment when I’m travelling, a moment of clarity where I look around and truly realise where I am. It feels like a victory over a prescribed formula for a life inside the box and it comes with a profound sensation of freedom. Sometimes I’ll find it in the face of adversity; sitting alone in the Mexican desert or getting smashed by a thunderstorm on the front of a wooden Indonesian boat. Other times it’ll appear in beauty of the landscape around me or in the seemingly mundane act of people-watching in a busy foreign city. There’s magic in the experiences that you can’t plan. They’re the moments that are the hardest to find because they’re not on the map. They’re not destinations, rather parts of a journey that are gifted to you when you throw caution to the wind and just go.

From where I sat I could see a trail of dust rising in the heat on the horizon. The guys had finally returned and after parting with the remaining beers in our esky as a token of our thanks, we were back on four wheels again. Eventually those wheels found bitumen and we rattled and bounced down the highway, dodging potholes and holding our breath while we squeezed past oncoming semitrailers at 120km/h. Despite the white-knuckle driving, I felt content. Those white lines were pulling us forward again while three back-to-back swells were marching up to meet us. This surf trip hadn’t even seen a wave yet, and I already felt like we were scoring.

There's nothing quite like an empty road, a distant horizon and the promise of waves. 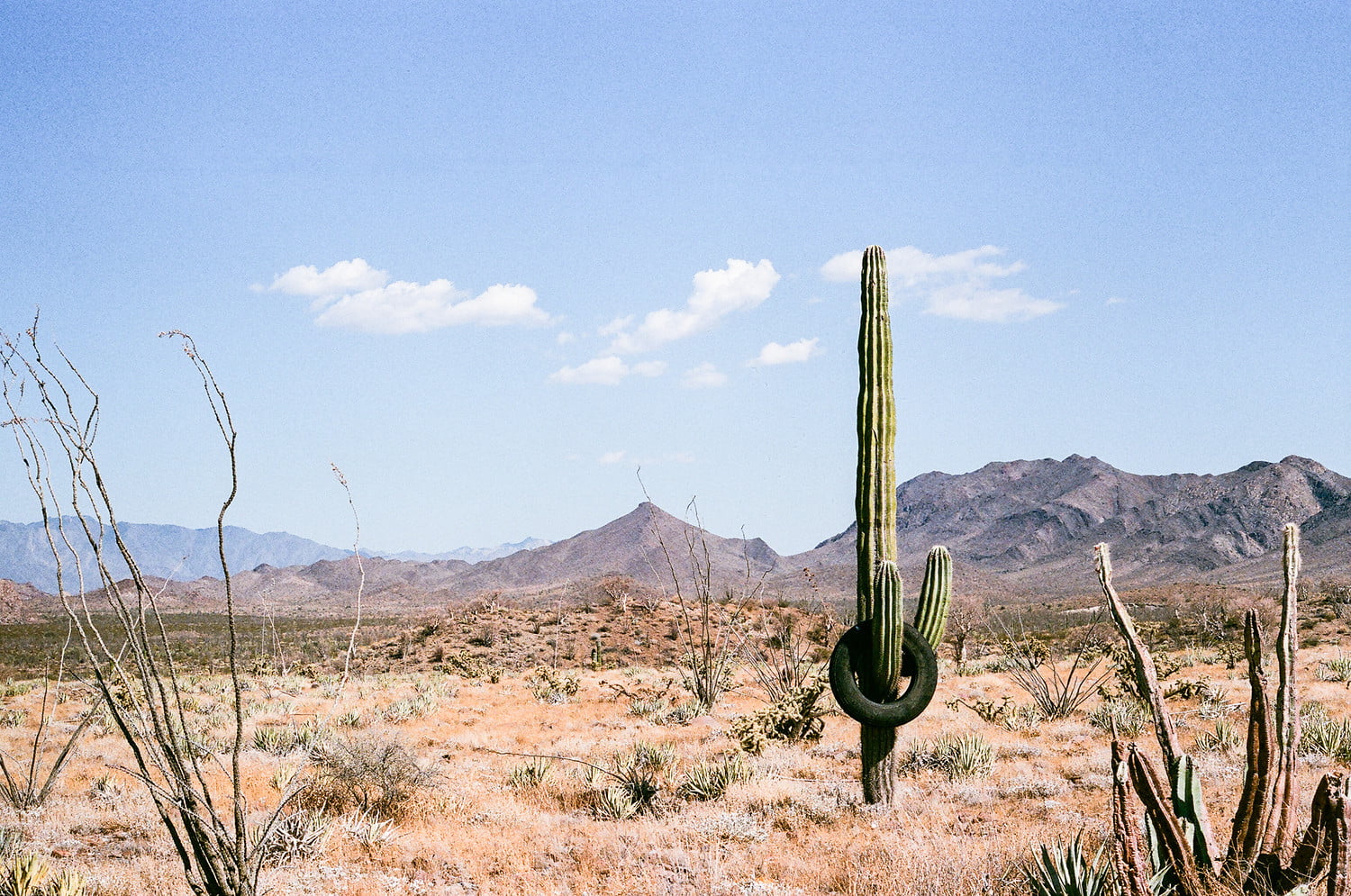 The view from a car with two flat tyres. That's irony for you.. 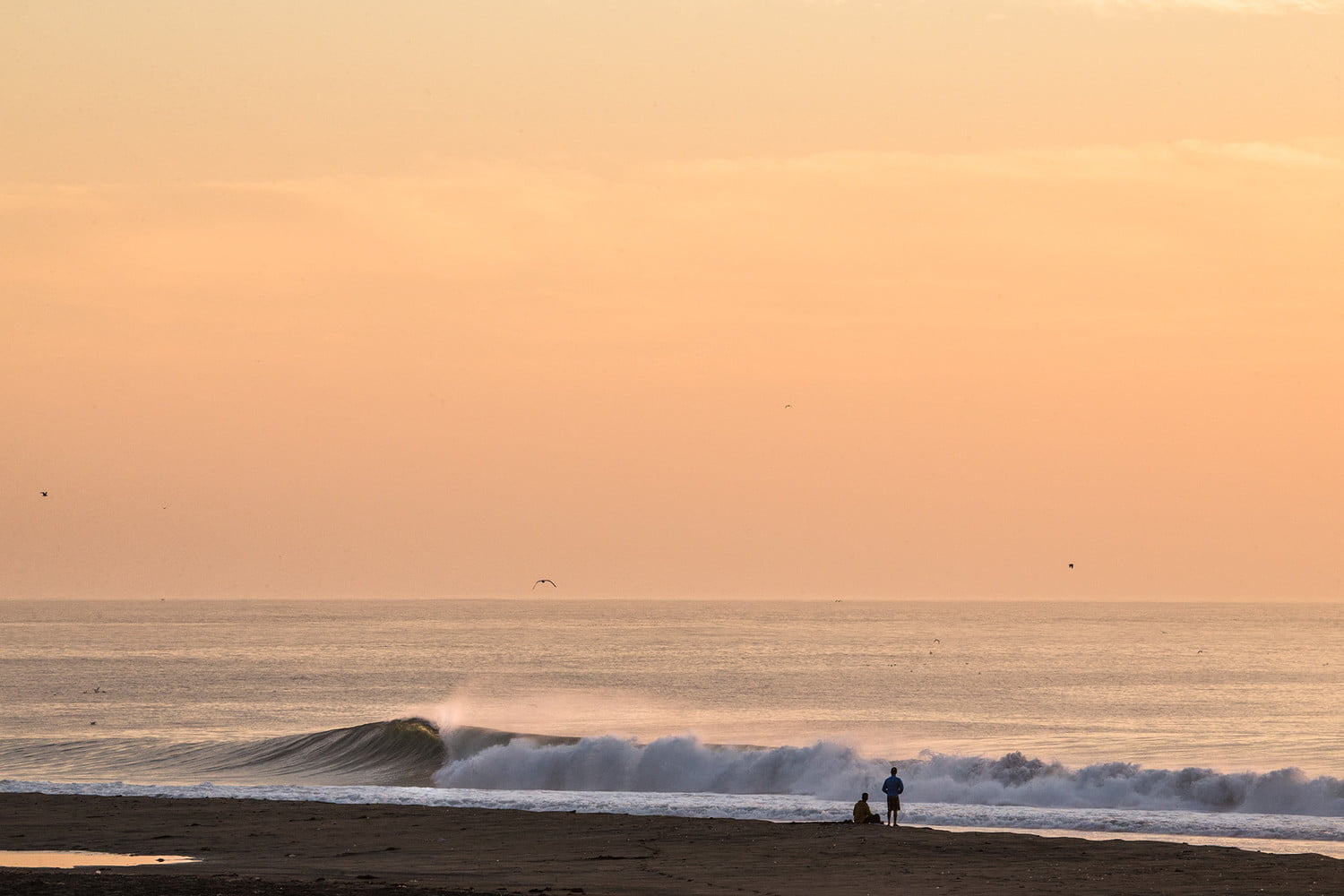 Golden hour and its glistening riches. 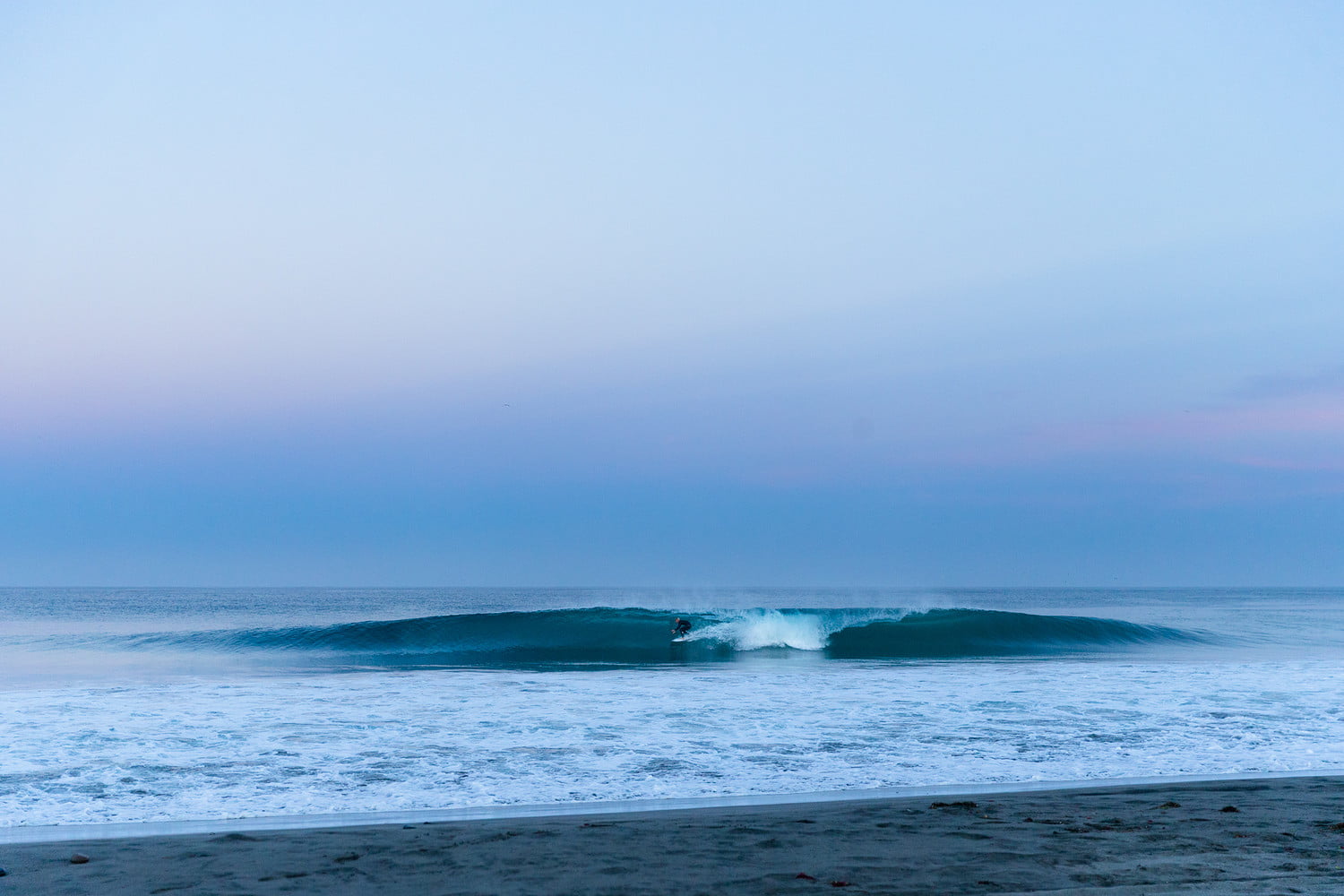 Racing the section and racing against the last light. 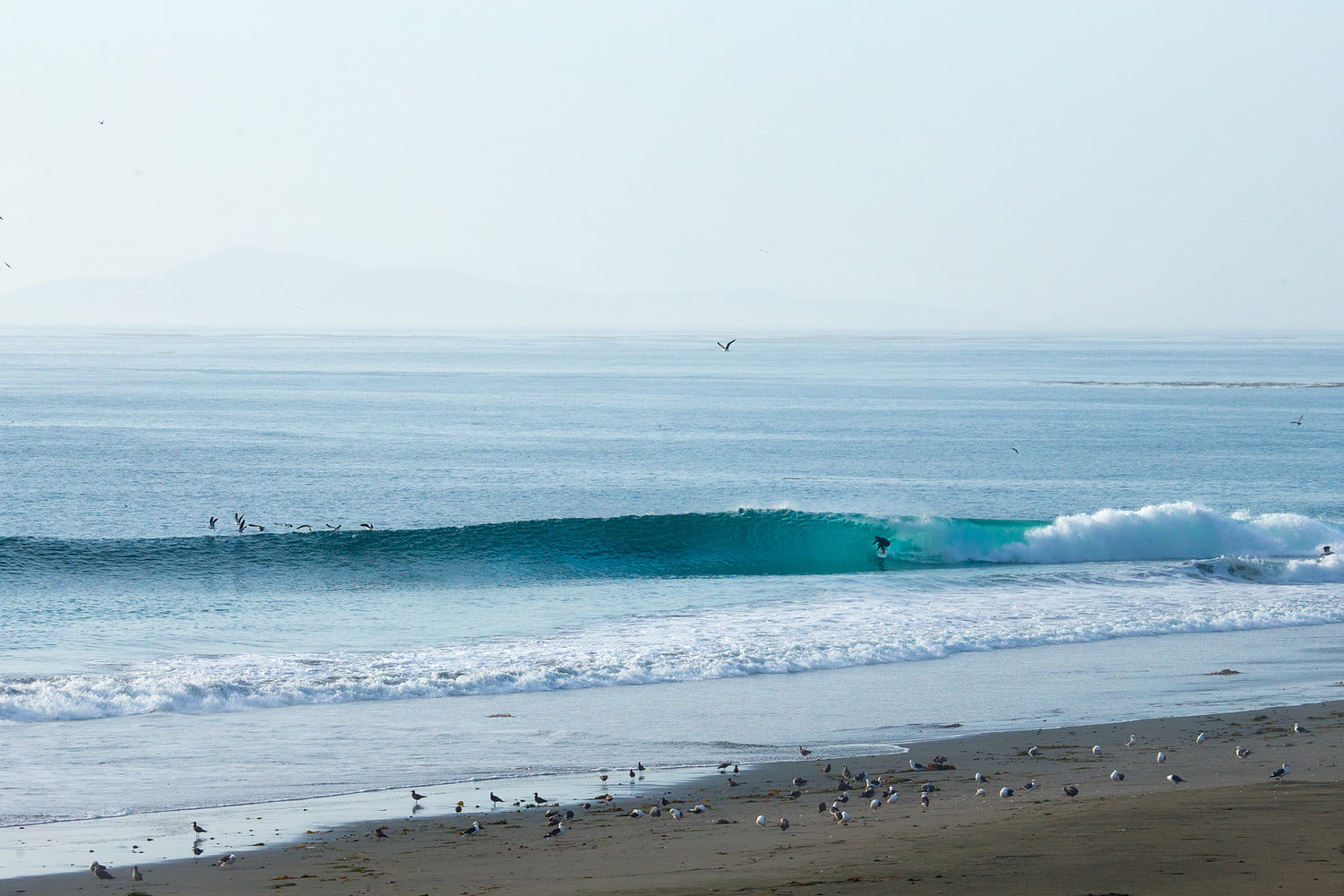 Crowded skies and busy shorelines but the rest is all yours. 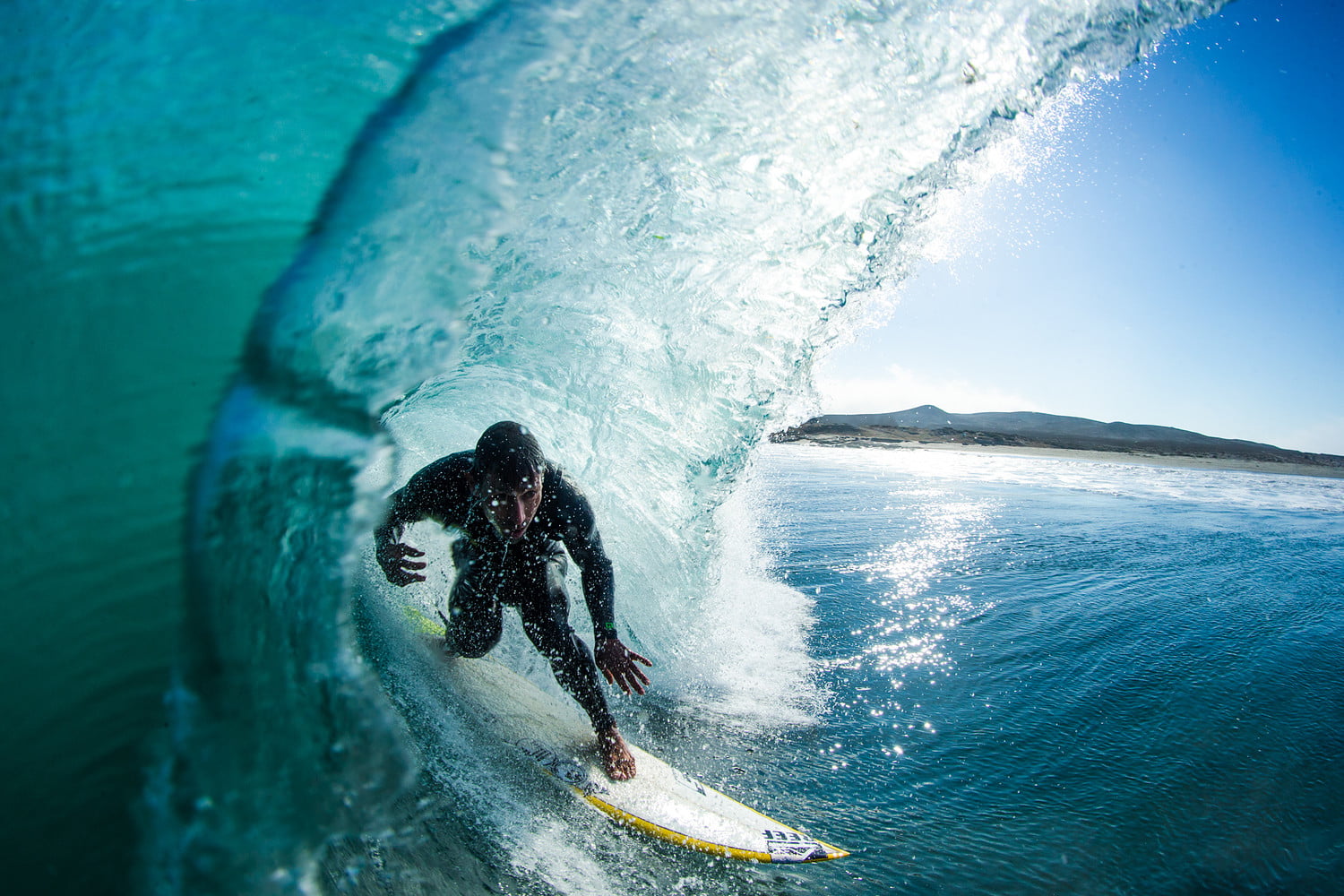 Matt Rott rolled up nice 'n' tight in the land of the burrito. 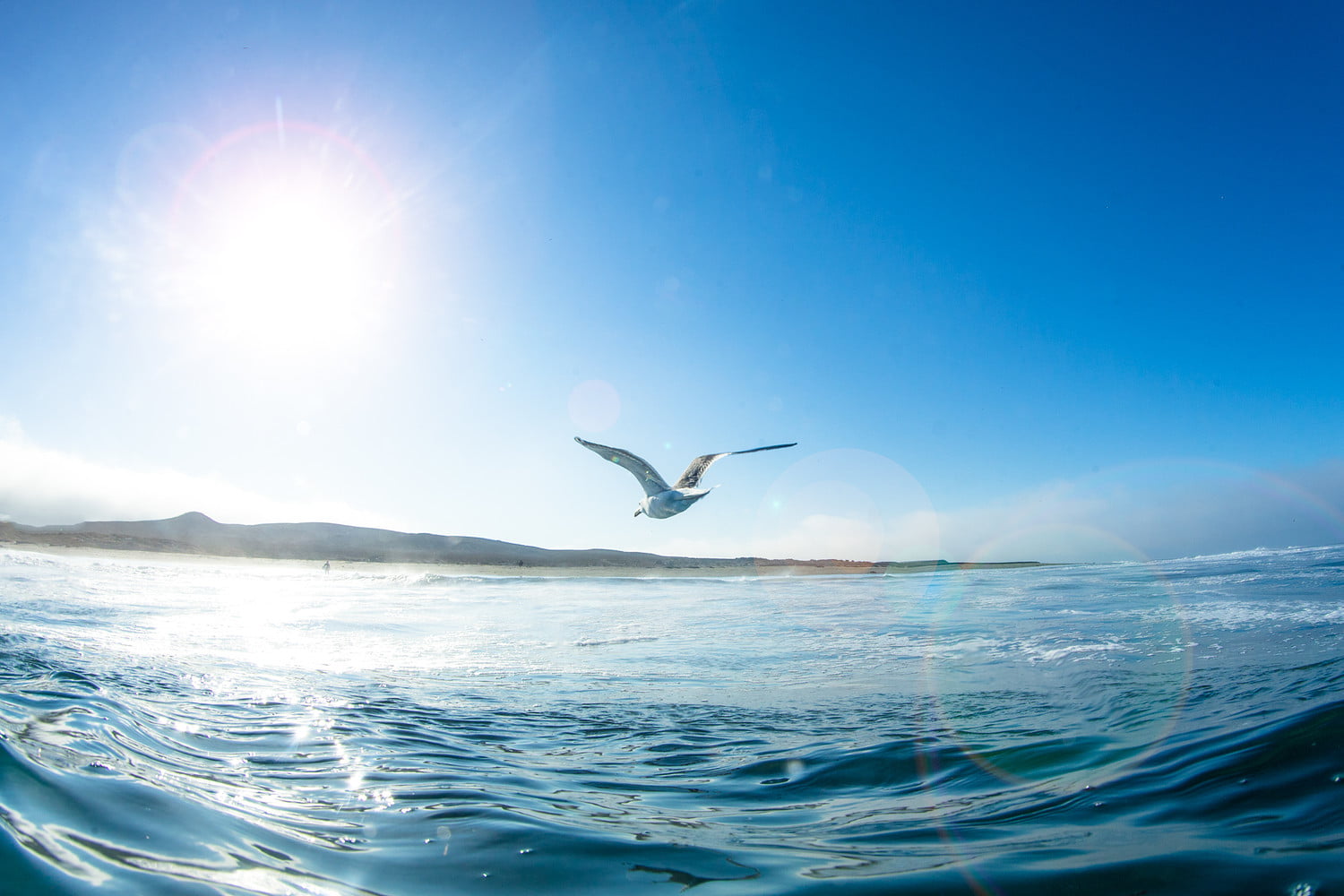 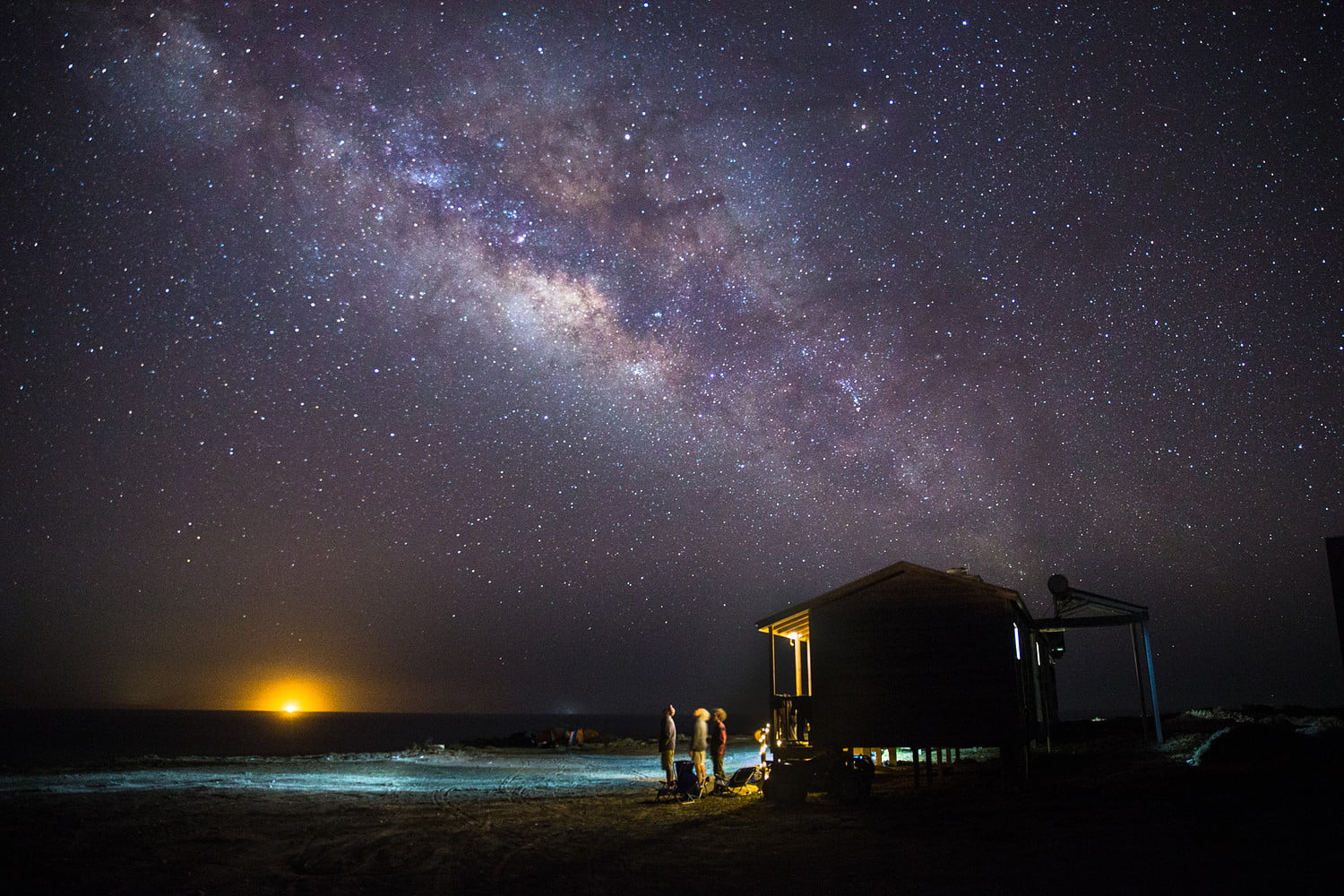 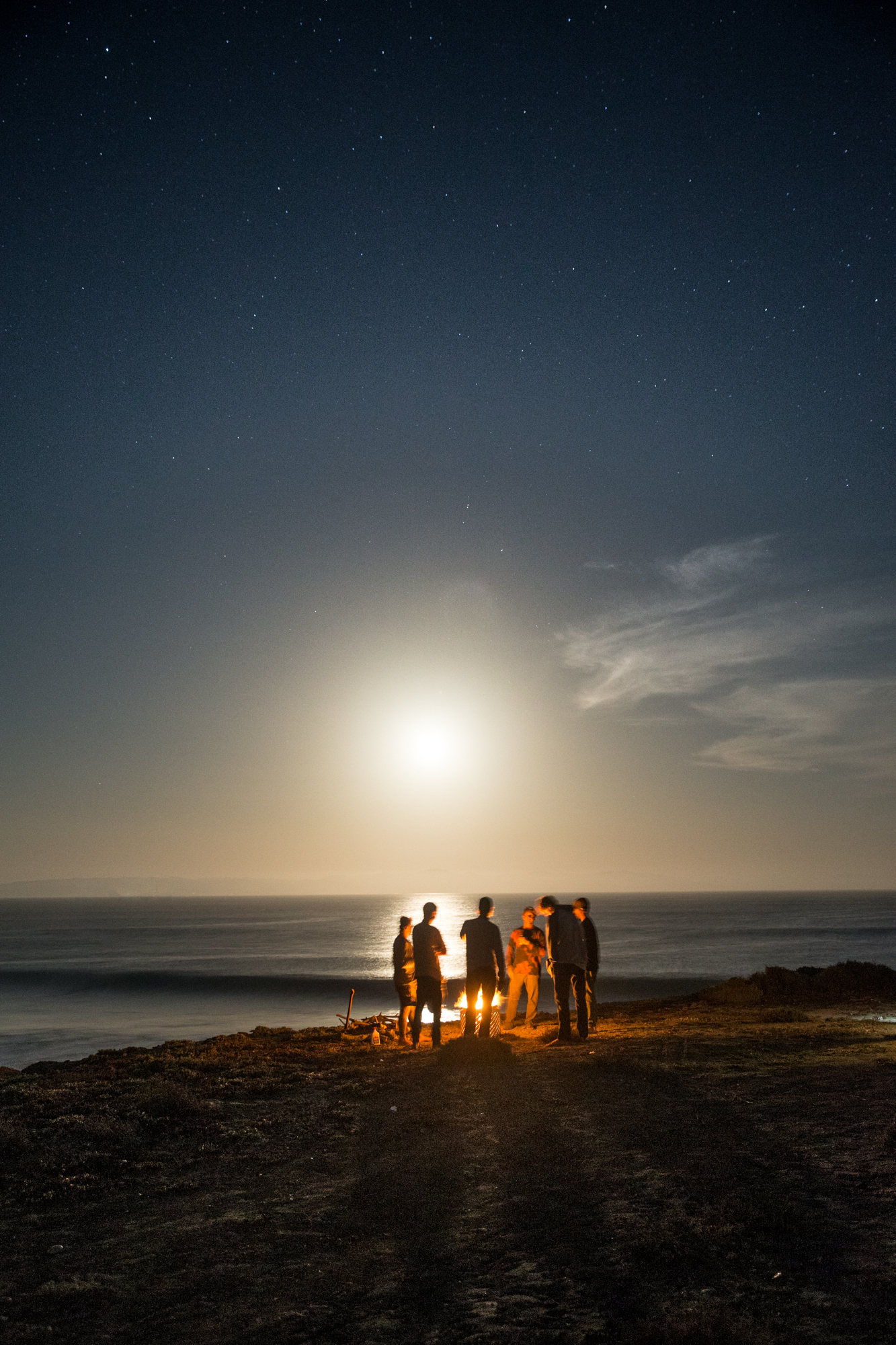 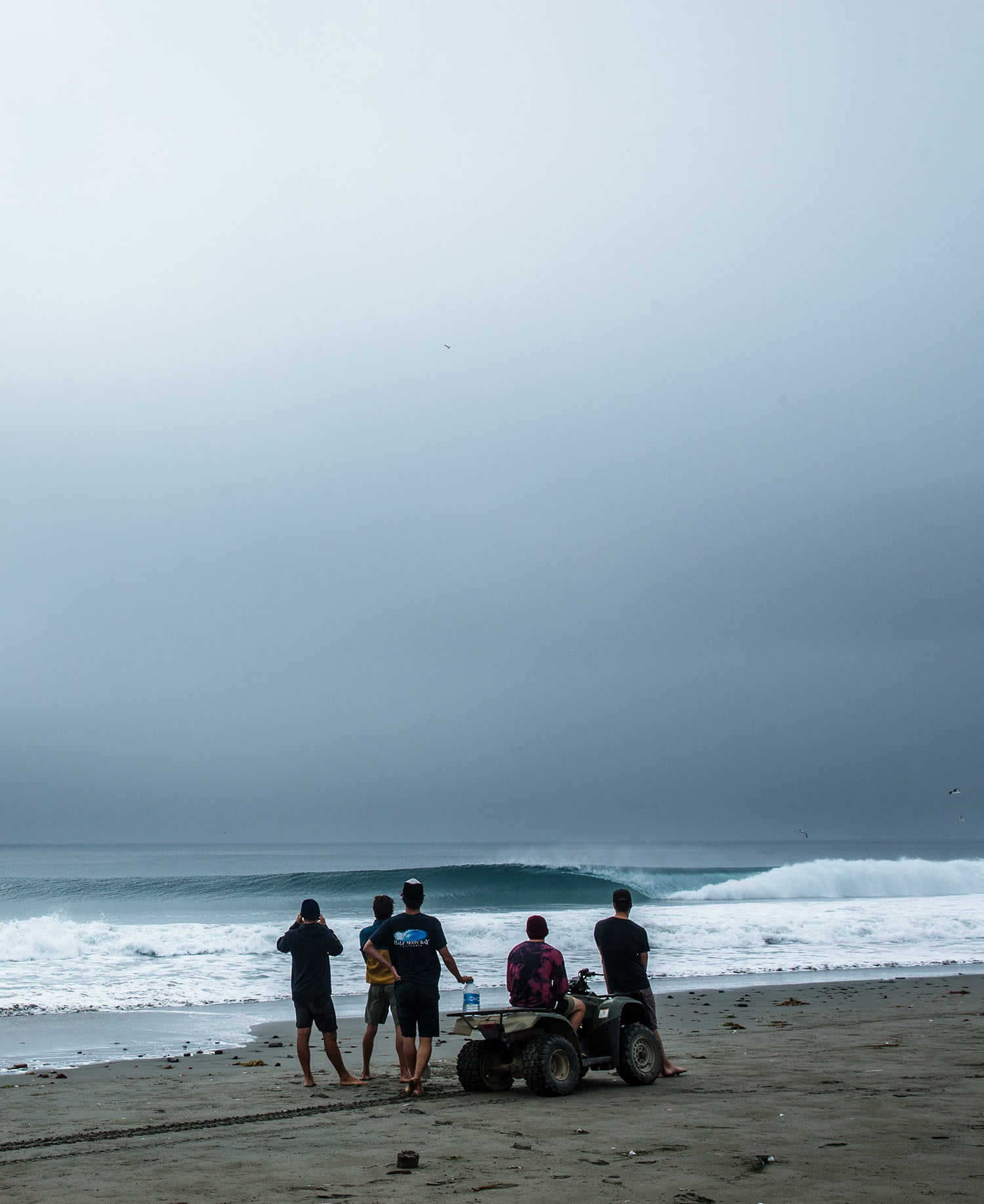 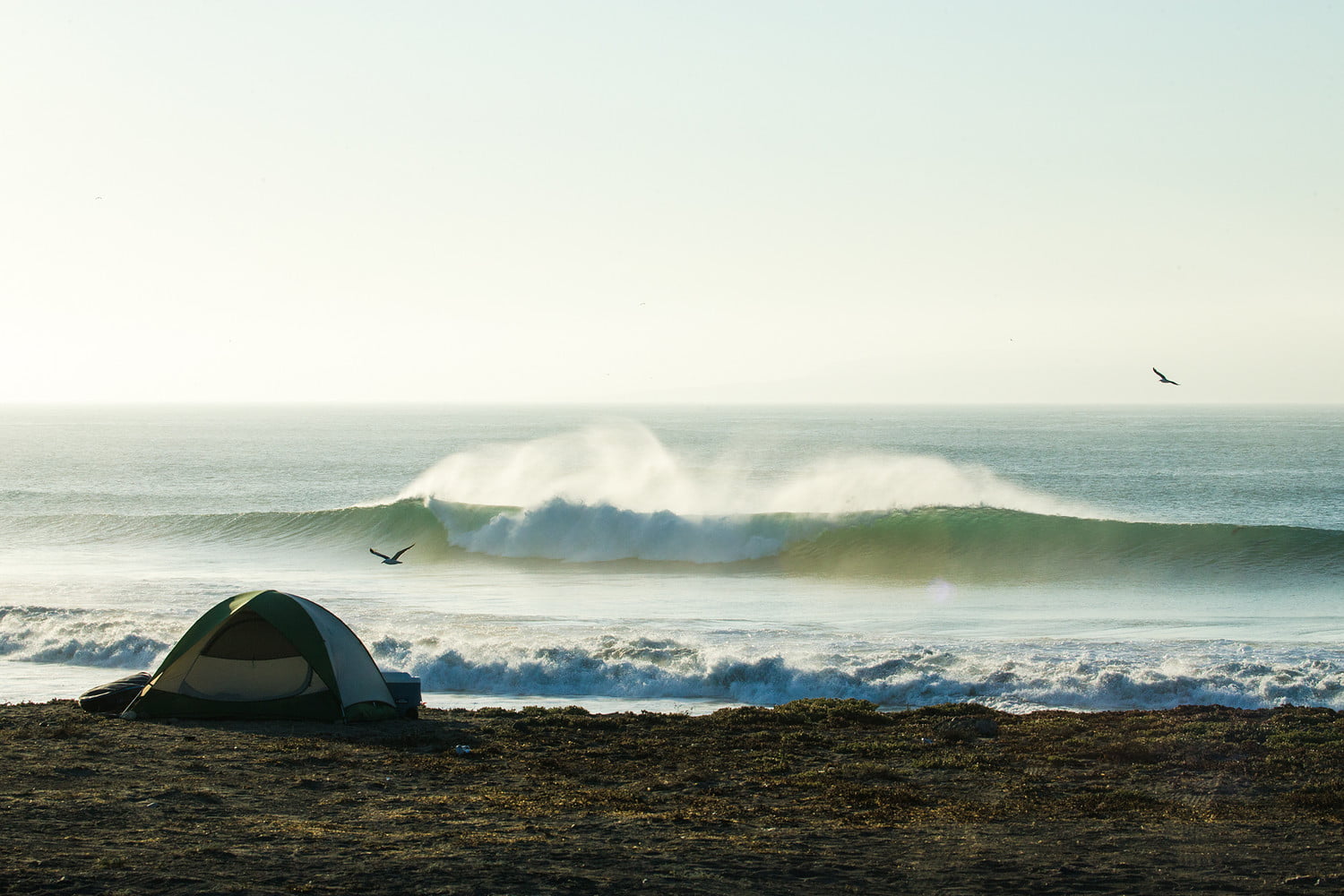 Tents in the front, Teepees out the back.

After four days of flies and canned rations, civilisation never tasted so good. 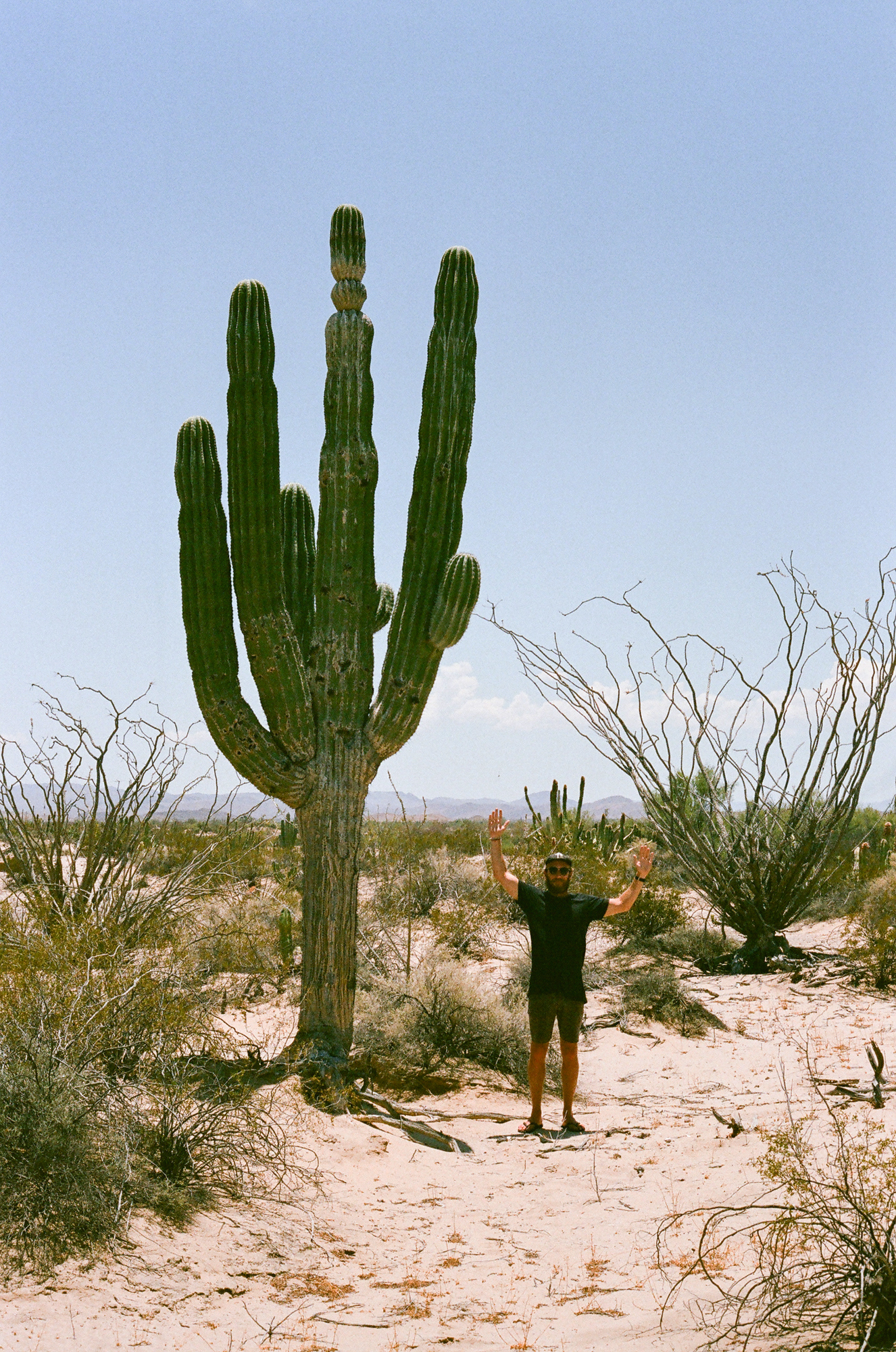